Sprovieri Gallery is delighted to host the UK presentation of Nan Goldin’s Fireleap as part of the inaugural exhibition at the new gallery space at 23 Heddon Street, London.

Nan Goldin is known as an artist whose output is inextricably bound up with her own biography, and for breaking down the traditional barrier between the camera and what is being photographed. Her naturally lit images document her surrogate family of friends and lovers, and – more often than not – are frank confrontations with personal experience, and explorations of both intimacy and the alienation that can be wound up within it.

Slideshows are Goldin’s preferred medium to work in. Fireleap is her latest slideshow, displaying images of children from 1978 until today, most of which have never been shown. Children, primarily for their state of freedom and natural innocence, fascinate Goldin. They make their own rules, living in a free zone utterly their own, like beings from another planet. Photographing the children of friends, as well as her Godchildren, Goldin offers a view of their raw emotions ranging from wildness to melancholy. Fireleap captures a consciousness while it is still unbound by societal boundaries.

A series of landscape photographs will also be on view. Goldin, who has traveled extensively, incorporates these photographs in her work as another aspect of personal experience. These photographs are not displayed solely for their aesthetic value, but are primarily a metaphor for larger emotional states. She has been taking them since 1979 but never shared them. “They have been my secret work metaphors for loneliness... (I was) trying to break the glass between the outside world and me. I had lived in a dark space for 15 years so the landscape was unfamiliar to me, a fascination with an unknown world outside”.

In addition, three recent grid works are exhibited, marking a new approach in Goldin’s work. Concentrating on atmosphere over narrative, these grids reflect on wide-ranging states of being. There is a departure from themes of crisis, trauma, and loss that are prevalent in previous work while elements such as chance, regeneration and humor are present instead. Shape Shifting 1, 2010 portrays rebirth and transformation. A series of double exposures in Double-ex version 2, 2011 show the collision of separate events that took place at different points in time, consequently creating a new reality out of accident. They serve as homage to analog photography in this digital age. In Empty Rooms, Berlin/Hamburg 1983-1996, 2010 uninhabited rooms are presented as a series of portraits. The photographs were taken in old whorehouses, pensions or gay bars. They are like the people's faces that Goldin wants to remember, places she became intimate with.

Goldin's work has been the subject of two major touring retrospectives: one organized in 1996 by the Whitney Museum of American Art and another, in 2001, by the Centre Pompidou, Paris, and Whitechapel Art Gallery, London. Recent exhibitions include the installation Sisters, Saints & Sybils at La Chapelle de la Salpêtrière, Paris. Goldin was admitted to the French Legion of Honor in 2006 and received the Hasselblad Foundation International Award in 2007. ‘The Ballad of Sexual Dependency’, a slide show with over seven hundred images, was most recently presented live in Turbine Hall at Tate Modern, London, in 2008; it was installed in the exhibition 'Here is Every'. Four Decades of Contemporary Art at The Museum of Modern Art, New York, September 2008 to March 2009. Her ‘Scopophilia’ recent slide show was shown at the Louvre in Paris from November 2010 to January 2011. 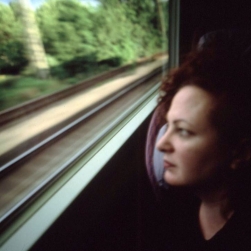